Lorem Ipsum is simply dummy text of the printing and typesetting industry. Lorem Ipsum has been the industry's standard dummy text ever since the 1500s

Although virtual reality has taken its fair share of media coverage lately, mixed reality and its virtual overlay of information is positioned far better as a long-term technology to change the way industries and organizations are going to create customer experiences in the future.

Crafting unique experiences
Breaking from the current mixed reality solutions on the market, the Dreamoc display doesn’t require any special set of glasses, headset, or other wearable tech for the experience to unfold before your eyes. This makes the Dreamoc a powerful tool for not only communicating product details, but also for harnessing the scarce commodity of human attention, which is seen diminished to nothing more than a mere 8 seconds.

Being a glasses-free solution, the Dreamoc displays allow multiple viewers to engage in the same visual experience at the same time, giving the displays a profound ability to stop passers-by in their busy tracks. When seeing the layer of animated content on top of a real physical object, the mind is instantly triggered to pursue and examine at a closer look. This translates into increased dwell-time in front of your display and product, as well as engagement with the story unfolding, both vital components for converting viewers into customers. Think inside the box(es)
Strengthening customer experiences even further is now possible with a feature we call Dreamoc Fusion. This unique feature makes it possible to connect multiple Dreamoc displays, allowing the 3D holographic content to flow seamlessly from one display to others. When communicating your message with Fusion, you open up to a new world of visual creativity. You can create a flow of holographic animations moving from one display to the next and back, or you could have a wall of displays in a store front window, each showing a little part of something bigger, coming together in the grand view of all the assembled displays.

Your imagination and the nature of your message are in fact the only limits you will encounter when creating grand content for a series of Dreamoc displays making use of the Fusion feature. 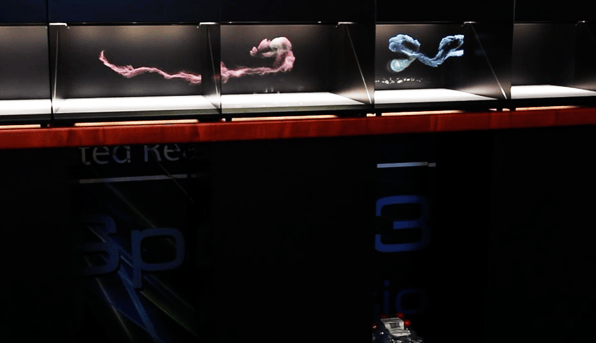 Be part of the development
The ongoing evolution from the traditional brick-and-mortar retail to technologically innovative experience stores, is creating a significant rise in opportunities for a new type of consumer engagement to manifest.
Especially beyond the digital world of online shopping, technology is playing an increasing role in the physical retail environment, with the vast majority of brands now looking to infuse their spaces with more experiential elements and emotional storytelling.

Research by Sonar shows that as much as 70 percent of U.S. millennials say they would be interested in brands that use mixed reality as part of their shopping environment. This new era of retail has recently been dubbed FrontierLess, as the boundaries between layers of reality merge and the traditional way of thinking about shopping experience fades, giving way to mixed reality solutions as a key driving force and creating new opportunities for building relationships with your customers without any friction.