Lorem Ipsum is simply dummy text of the printing and typesetting industry. Lorem Ipsum has been the industry's standard dummy text ever since the 1500s

DELL’s FRS events are internal sales events, which internally promote DELL products and messaging. The EMEA events are attended by around 3,000 representatives, including top-level executives.

The DELL client solutions team wanted a stand-out experience that would cut through the usual trade fair noise to capture visitors’ attention.  DELL wanted to create a positive sense of engagement and tell a story that would leave attendees enthused with a desire to go on and actively promote and sell its products. 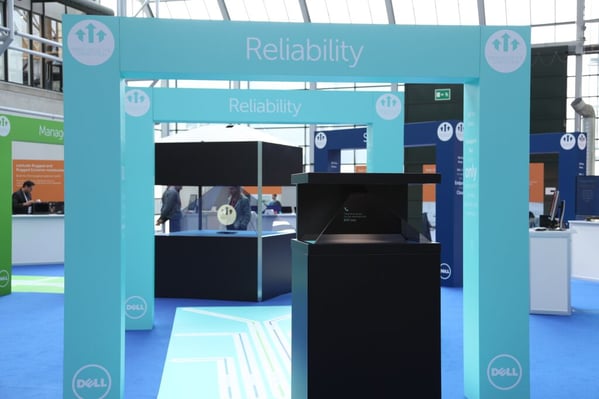 The stand area was anchored by a Realfiction Dreamoc 360 XXL in its centre. This large glass pyramid housed a stunning 3D holographic display that told the story of the DELL client solution hero’s progress through Europe.

The four holographic elements created a show-stopping visual effect and generated the buzz around the stand the DELL team were seeking. The stand attracted a great number of people and earned positive feedback and approval from the senior executives in attendance. 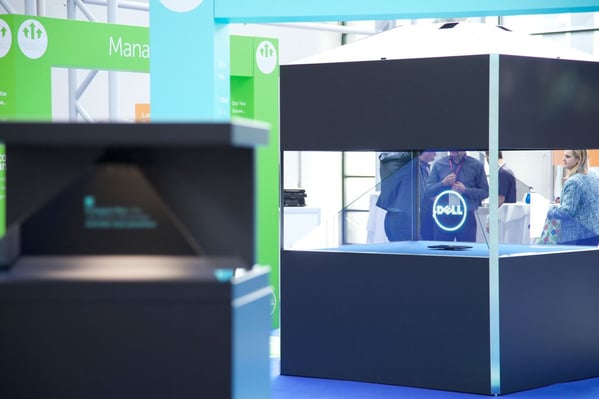 The 3D Holographic display proved a great tool for getting FRS visitors to the stand but its overriding benefit was the simple and concise way the displays could communicate valuable client solutions information and messaging to visitors in an engaging and truly memorable way.

The three smaller pyramids offered supporting stories and information about how DELL out-performs its competition in three key areas of differentiation: Manageability, Security and Reliability.

The DELL team found the displays a uniquely effective way to communicate this key messaging.  Attendees walked away from the fair with the clear client solutions messages at the top of their mind, ready to sell.

AdPeople are already in talks with DELL about creating further engaging stand displays using Realfiction’s Dreamoc 3D holographic technology to attract and engage attendees at other FRS events across Europe.

MAKING AN IMPRESSION WITH YOUR TRADE SHOW STAND