We wrote this article to clarify the various types of immersive technology currently on the market, and help you understand which of them could be interesting for you to pursue further.

Augmented reality, virtual reality, and mixed reality are terms strewn across many articles and posts on technology these days as well as their acronyms AR, VR, and MR. And often the various options are mentioned without a proper explanation leading to misunderstandings and the idea that much of this technology is either not ready for use or does not apply to certain organisations or companies.That is why we wish to clarify and explain the various types of immersive technology showing that you can, in fact, apply it to anything. The trick is to understand each type of immersive technology and figure out how you can use it for your specific purpose.

First, let’s dive into those acronyms...

Virtual reality (VR) is a concept that has technically been around for decades. In short, virtual reality means using equipment that separates you from the actual reality and places you within a digital version of reality – a virtual one. Pop culture was quick to incorporate VR scenarios into movies even in the 80’s and 90’s, and we have grown accustomed to seeing the term and the technology applied on-screen. It is fairly easy to explain and understand that VR is defined as a closed universe of its own, that you will gain access to when wearing certain quite uncomfortable headgear.

Wearable tech like virtual reality equipment cuts you off from watching the world around you and instead you are watching the digital screen inside your headgear showing a version of another reality and from there the possibilities are quite close to endless.

Rollercoaster rides could shoot you on a tour through dragon ridden rice paddies chasing treasure, or the morning commute on a train could transform into an orbit around Jupiter, or perhaps you could go to the dentist and lie in his chair undergoing dental work while traveling a world of futuristic scenery in case you suffer from a slight dentist phobia.

While some virtual realities may be created simply to look at, others will let you move about actively, and with additional gear you will often find the possibility to act and impact the world within the specific virtual reality. Sony Entertainment has launched an update with special gear for their Playstation consoles allowing you to immerse yourself in a game and be part of it, instead of watching it on a screen. With a controller in hand or the special hand accessories you can handle guns or other weaponry, you could take charge of a horse or a car, or you could physically fight a foe in a virtual reality game.

As the name would hint, the concept of augmented reality (AR) is not a separation from the reality you see around you, but an addition to what you perceive with your own eyes; an augmentation of the reality you are in. It sounds a bit tricky, but it is really quite simple. With augmented reality, you look at the real world surrounding you through a digital device, transparent headgear or a smartphone/tablet with the camera turned on. The lens of the glasses or the screen then shows the augmentation of reality, as it is simply a layer of digital imagery superimposed onto reality as seen through the device or lens.

This augmentation could mean looking at your house and seeing not only the actual house you live in but also that new extra floor, that you are planning, perfecting the illustration of a finished building project. Or you could point your phone to a field of furrows and watch the trees and bushes of a park sprout and grow in front of you to illustrate the park, as it may look after five years of careful cultivation. Or maybe you turn your head in the grocery store to see the origins of your potatoes and oranges shown with information on farmland, crops, and nutritional value.

Swedish furniture giant IKEA has for many years toyed with augmented reality, to bring a new depth to their annual catalogue with a smartphone app. Browsing through the catalogue pages with the app open, looking at the pictures through the smartphone, patrons were shown not only the depicted furniture, but also available colour variations and the ability to place furniture as it would look in their own living room.

Still, one of the most famous uses of augmented reality is the Pokémon Go app, the mobile game that became a worldwide craze with the frenzy of catching the popular fictional critters by finding them on the map and switching to a shared screen of actual surroundings and a digital overlay.

At first look it may be difficult to distinguish mixed reality (MR) from especially augmented reality. But where AR and VR rely on handheld or wearable devices for the viewer to experience a digital layer, mixed reality is a technology that, well – mixes, the real and the virtual for anyone to see with their own eyes, which means that the virtual and the physical reality intertwine and can interact with each other.

Currently mixed reality is possible by wearing headgear like the Microsoft HoloLens or the Avegant, but these solutions still only let one single person experience the superimposed digital reality. Solutions like the Dreamoc displays or DeepFrame on the other hand are mixed reality solutions that allow larger crowds to view the same experience, at the same time, without wearing any equipment at all – making it especially suitable for advertising purposes.

As an example, this gives say a museum the opportunity to present an entire audience with the shared social experience of seeing a dinosaur grazing in a courtyard, without anyone being left out if they are not wearing the special headgear. It is possible to create settings in which an audience could look through different windows at the travel agent’s office and seeing three different vacation spots come to life in front of them, complete with ocean spray on the glass or a glowing sunset on the Pacific.

The somewhat mysterious company Magic Leap are on the verge of launching their very secret solution and if rumours are to be trusted this could be a real game changer in the field of immersive technology. It is said to be a wearable device but not like the ones we are already familiar with, and the whole world of tech is – still - holding its breath waiting for the solution to be revealed. 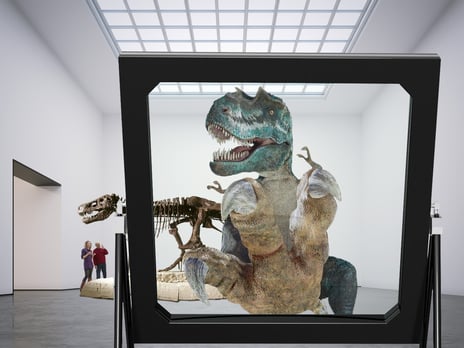 In the meantime, fully taking advantage of the long-term advertising possibilities of immersive technology and the various realities may still be a bit of a challenge, but getting to know the different types is something every company should start becoming familiar with. Consumers change almost at the pace of technological development, and being ready and agile is key to communicating to customers where they are and can be reached.