Accept
BACK TO CASE STUDIES

More than anything else Realfiction partner Seenspire knows how to turn heads, and having worked with high profile clients such as Disney, Dell, KBC, and Hummel, Seenspire has a lot of experience in creating attention using 3D holographic solutions.

However, when luxury diamond brand Rosy Blue approached Seenspire to prepare for the annual watch & jewellery fair, they were faced with a task unlike any before.

The challenge
As a respected leader in the industry Rosy Blue’s main objective was to stand out from their competitors at the upcoming fair and deliver their brand message about craftsmanship of diamonds in a unique and memorable way. This is no easy task considering that every single brand at the fair would be fighting for the attention of passers-by. Rosy Blue knew they were going to have to be extremely innovative with their marketing to be able to class the event as a success.

There was also the objective of promoting and preferably selling a $3 million diamond during this 8-day event. Now it’s one thing to catch the attention of event attendees, but engaging someone in this specific audience into a buying state for such a high-ticket product required something special.

Seenspire knew that if they were going to impress anyone they would need to be able to display an immense level of detail in their 3D holographic content. They were dealing with jewellery after all, which is all about fine and intricate details.

The concept
Having laid out the main objectives of the campaign, Rosy Blue handed over the concept and delivery of the project to Seenspire’s experienced creative team. And after careful deliberation the team devised a concept of showing the journey of a diamond from a rough stone to a fine and polished 33.11 carat cushion cut diamond with a flawless clarity grade worth more than $3 million.

this would deliver the level of detail they needed in order to create the desired attention and engagement at the fair.

The logic behind the concept was to not only promote the product, but to add real value to customers by providing them with a rare insight into the craft of producing a diamond; an insight seldomly available anywhere.

Communicating this complex product story among such buzz and high volumes of meandering people would be difficult, and the time available for playing out the story was limited. All the more the Seenspire team needed to create a story making spectators stop, and grab their attention making them want to see the entire story and connecting with both the brand and the product. 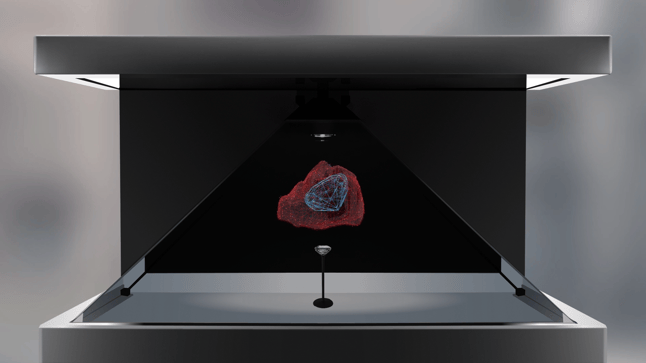 The delivery
Sometimes coming up with a great concept is easy, but delivering said concept and aligning it with the client goals, however, demands massive attention to detail.

This is why Seenspire assigned their 3D jewellery modellers to the project, allowing them to get as close to the real thing as possible, ensuring that the physical diamond would not look out of place alongside the animation.

On top of the 3D animation inside the Dreamoc display, Seenspire also produced a custom 3D printed stand for the original diamond.

The results
Already on the first day of the event Rosy Blue staff noticed that the dwell time at their stand increased. Passers-by could not resist taking a closer look at the display and became transfixed as they watched the story unfold in the beautiful holographic animation.

There was a clear buzz around their brand and product throughout the event, and both customers, fellow brands, and exhibitors alike were wowed by the display. Earning the respect of your competitors, you know you must be doing something right.

To top it off something happened that even no one among the Rosy Blue team themselves had expected - they sold the diamond in the early days of the event. The Dreamoc display and Seenspire’s creative solution had not only demanded the attention of the audience, it had also encouraged action.

Overall the campaign surpassed everyone’s expectations. Rosy Blue were able to deliver a unique brand message to their target audience as well as selling their main product. Mission accomplished.

“Being one of the leaders in our sector, we wanted our booth to stand out and be in line with our reputation. We wanted to catch the crowd’s attention and impress everyone, which is not an easy task when there are hundreds of blazing booths around. The Dreamoc display and Seenspire’s creative content attracted great attention.

We noticed that many more passers-by stopped at our booth and many of our clients shared their enthusiasm,” says Tolga Onder Ozel, Digital Marketer, Rosy Blue.